This pretty much sums up last night.

We started at KattyPants' and played some Pop 5 with a few pals and some great ga/uys.

Fun times were had, and then we headed off to crazy local Karaoke bar where I swear to GAH- the "host/ess" was like a slightly-less-male Daniel Johnston.

Mutey was also there, as always -and took quite a shine to Jeanine.... again, apparently ;)

He's this regular there, full-blown mute. He sends notes to our table. Priceless, man- Priceless.

I sang quite horribly, the microphone had this weird ECHO affect on it- which is grand for "White Rabbit"- not so good for uuhhhhh, ummmm... Shit! What did I sing last night??!

Anyways pricessless moment #2 was Kattypants' vocal stylings, while the timid (?) woman working the bar had a look on her face of pure horrific measures.

I thought you were Grrreat, Kats!

Like I said though, all in all- the song above pretty much sums it up.

Oh and the dog- doesn't know that it's "Saturday", so I was rudely awoken before 7am, slid into my adidas pants and went for a half-asleep walkie.

You know what really grinds my gears?
I breakdown and hit McDonald this morning for some much sought after mornin' grease. I've been up for a few hours now and am hungry hungry hippo.

I order an Egg McM, sans viande (thats meat- people!) and it comes to me with not only the woman behind the counter saying "one Egg Mc Muffin- no meat", but also with one of those ESPECIALLY MADE FOR YOU stickers and a ticket stating NO MEAT.

I sit at my desk, open it up and BOOM- there be the meat.

I am writing a letter that's it.

A girl from work wrote a letter about her ketchup chips. Got like 4 chips in one of them little bags. Needless to say- she wasn't havin' it. 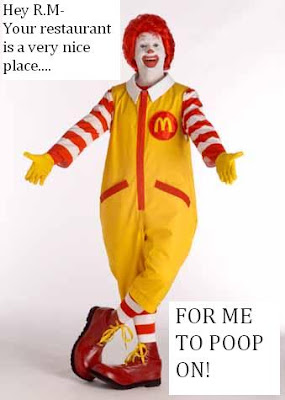 What really grinds my gears is that Tango's leash broke this morning on our morning walk. It's tough walking around with a Pointer's collar attached to your hand.
He was sniffing a pug when it happened. 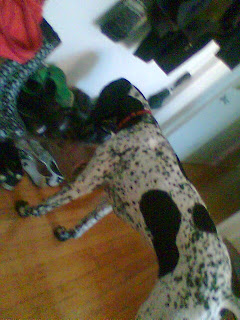 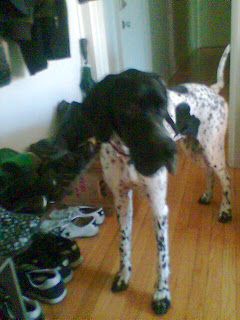 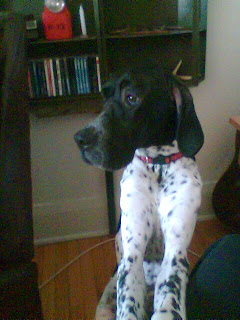 What greases my gears is that I found the perfect wraaaastling-like boots for A and J's party next month. 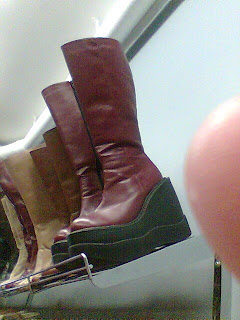 Need to book some time off to get up to Port Elgin to see Corey's rents.
The beaches there are sooo nice 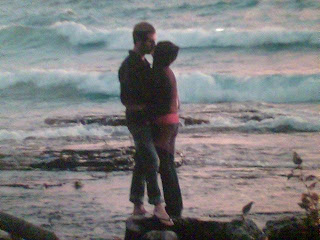 DOUBLE awwwwww
Posted by krista zee at 10:32 AM 2 comments:

We're puppy sitting a giiiii-normous English Pointer.
He's taller than me.
His limbs are insane.
He's 7 1/2 months old.
He's hyper-active.
He needs to sniff every item of our tiny apartment.


Will write more if we survive this week.

Lately when I get home from work. It's us, a corona, bad teevee and maybe a smoke.
But then I come up with these amazing meals.
Like last night.
I went grocery shopping after work and just had one of those moments were you find yourself throwing random items into your basket. I was hoping to come up with the concept of "dinner" whilest shopping, but soon found my basket drowning in Mangoes, ricotta cheese, Collard Greens, Indian naan, Sundried Tomato Pesto, etc. etc.
Basically I am being visited this week by "Aunt Flo(w)" and I was hussling around the grocery store, picking up basically any food item I wanted at that moment.
Well, it all worked out I must say!
I made these flat bread sammiches. Grilled em up, with said ingredients (sand MANGO- i save that for later i think) and voila! dinner.
It was... righteous.

This eve is dinner with Fio and Ro.
Plus I am meeting Fi after work cuz I need to find a dress for this Saturday's wedding.
My old pal Tina is getting married in... Wiarton! So It's not only a wedding but a wicked awesome fam-damily event!


Actually it went pretty quickly.
It was so nice to get out with the girls.
The place we stayed was fantastic! Here I was thinking we would be "roughing it" at the farm this weekend- the house was huge, gorgeous, heated floors and all.
Tons of space. I could have LIVED in that kitchen. So lovely.
We had our fun, and did the whole girl thing.
We took pictures of eachother's best "ball sucking" face. My idea. Those pics are going in the vault. What was I thinking?
Here are a few that made the cut: 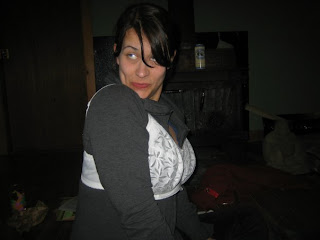 haha not EITHER of our bras! 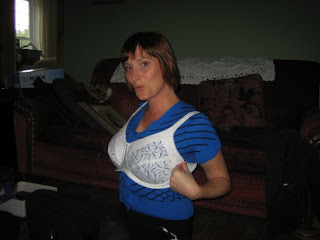 Speaking of horses, I missed Corey. It was the first time we're ever really taken a weekend "off" from eachother.

It affected me mostly at night. On the bottom bunk. Trying to fall asleep. Well, not entirely- the first night Krista drank straight up jamisons quickly, and smoked ... enough. So yah the first night wasn't that tough to fall asleep.
Oh that horse up there- We called him Cornholio.
Posted by krista zee at 5:31 PM 2 comments: 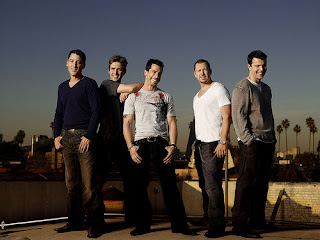 dood a job seeker talked about me on his blog today!

and I got a promotion!

and Paul Fournier has a long neck! 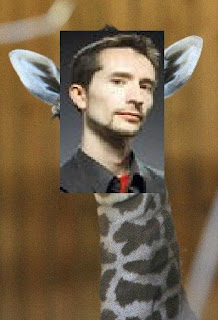 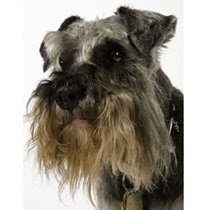 Corey, a 14-year-old Miniature Schnauzer from Toronto, was inducted into the Purina Animal Hall of Fame for his keen sense of hearing that saved the life of 80-year-old Jack Turner. Corey led his owner Jay Sobel 200 metres, tracking the faint distress calls of Turner, who fell into the freezing water of his swimming pool, before it was open for the summer season.
Posted by krista zee at 1:37 PM No comments:

I got a new desk!
I now have a window.
Nice view from the tenth floor of T dot.
I can almost see my house from here! (well, not really)
I was craving Ketchup chips like you wouldn;t even believe, but had to settle for Garden Salsa flavoured Sunchips. 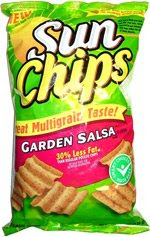 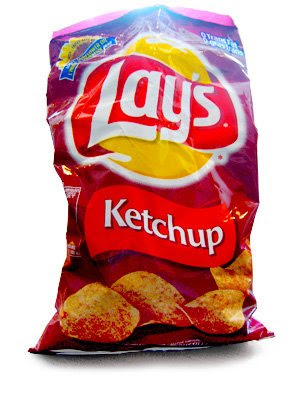